This post may contain affiliate links. Please read my disclosure for more information. 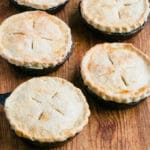 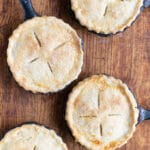 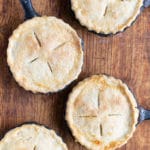 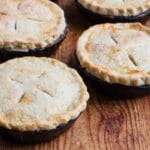 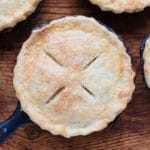 Topped with a classic flaky pie crust, one bite of these Mini Chai Spiced Pear Pies and it’s like fall appeared in your kitchen.

Confession, I love tiny desserts. Who can resist a cute, sweet, little treat that makes you feel like it’s better for you because it’s smaller than its regular-sized counterpart? I also share a strong fondness for all things cast iron. My family has been cooking on cast iron since the days they migrated to America as sheepherders in the 1880s, and these trusty kitchen companions have always held a special place in my heart. So, it makes perfect sense to combine those loves into these tasty Mini Chai Spiced Pear Pies.

We are also commercial pear growers, so this tasty treat is a perfect trifecta in my books! A mini dessert, cooked in cast iron and made with pear. If you love pears as much as I do, be sure to check out my other delicious pear recipes: Pear Pecan Muffins with Oat Pecan Crumble, Bourbon Pear Pie with Oat Pecan Crumble and Browned Butter Spiced Pear Bundt Cake with Apple Cider Glaze.

I started with ripe, but firm, pears and immersed them in chai-inspired spices, including a pinch of black pepper that gives these mini pies a little kick. Topped with a classic flaky pie crust, one bite of these Mini Chai Spiced Pear Pies and it’s like fall appeared in your kitchen.

If you're like me and love fall baking, be sure to check out my other fall desserts.

This post may contain affiliate links. Please read my disclosure for more information.

Topped with a classic flaky pie crust, one bite of these Mini Chai-Spiced Pear Pies and it’s like fall appeared in your kitchen.

After the first 20 minutes of bake time, I loosely place foil around the edges of the pie to create a pie shield and to prevent the edges from browning too quickly. 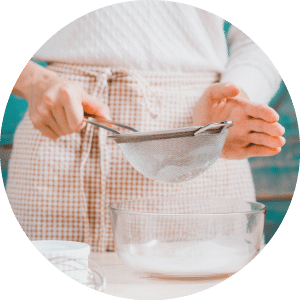 We live on a farm in Northern California where we enjoy a hard day’s work, home cooked meals and preserving the past. Oh yeah, we’re building a new (old) Farmhouse too! I created this blog as a way to journal our Farmhouse build and collect our family-favorite recipes. To learn more about us, click here.

🙋‍♀️ we’ve been living off these delici

Can you tell this beautiful piece is an air purifi

I love these beautiful candle and fragrance produc

Thanking myself this morning for meal prepping las

Starting the New Year off right with this tasty Ch

This pie is a combination of my two favorite thing